A Study of Menopause in the Workplace

We carried out a survey to find out just how much the symptoms of the menopause impacts life at work for women. 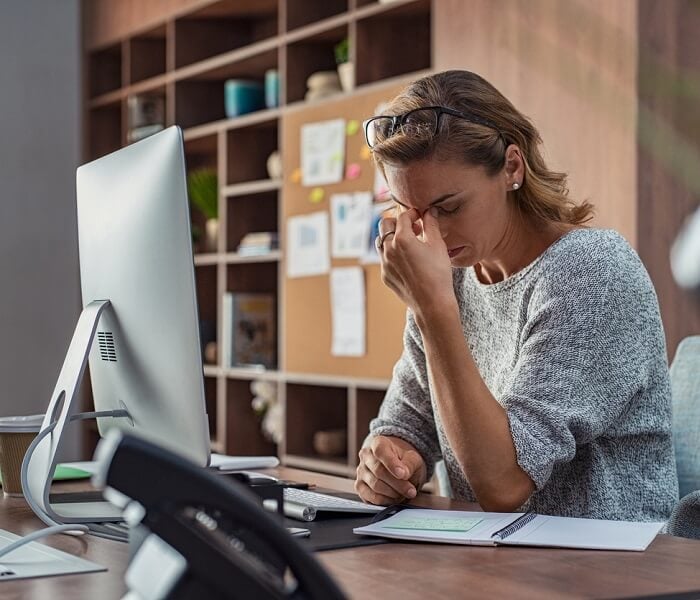 The Impact Of Menopause On Working Life

The purpose of this study was to determine how significantly, and in what ways, women in both full time and part time employment are affected by symptoms of the menopause. We also wanted to find out what policies and procedures were in place within organisations to provide help and support.

Of the women we spoke to, 77% said that they were either currently going through the menopause or had already experienced it. 63% said that their working life had been negatively affected in some way by their symptoms.

We asked the respondents of our survey to tell us the physical and psychological ways in which the menopause affected them at work. A significant proportion of the sample group said that they had trouble with one or more symptoms.

73% of women reported having hot flushes, while 63% said they regularly felt tired or drowsy. 48% suffered with low mood, 47% struggled to concentrate and 43% had trouble with their memory. As a result of this, 34% of women said that they had developed depression and anxiety, while 29% had significantly lost self confidence.

Only 6% of the whole sample group said that they did not experience any menopause symptoms at work.

How Does Menopause Affect Day to Day Work?

58% of the women surveyed by Forth said that they were still affected by symptoms of the menopause, and that this sometimes caused them problems at work. 41% said that their poor concentration or forgetfulness has led them to make more mistakes, while 40% admitted to losing interest in their job as a result. 11% forwent the opportunity for promotion because of the menopause, and 8% believed that their symptoms played some part in them resigning their position.

Of course, as with almost any condition that affects the physical and mental health of the sufferer, individuals going through the menopause occasionally require time off work to deal with their symptoms. Overall, our study showed that 24% of respondents had called in sick as a result of the menopause and almost half of those individuals said they’d done so more than once.

The Help and Support Available

A staggering 90% of the women who responded to our survey said that their workplace had no help available at all when it came to employees going through the menopause.

Of the remaining 10%, 5% said that there was free advice available, or some form of “menopausal club”, at work. 3% said that their place of employment had policies that had been created to help those struggling with their symptoms, while another 3% said that line managers were given training to provide help and support for both the physical and psychological effects of the condition.

Very few women spoke to a superior about their condition, with the national average sitting at 15%. While 37% of Northern Irish respondents said that they had discussed their issues, 90% of those from the South West never had.

32% of women said that they had to be told about the available support by female co-workers. 28% were told about it by a superior, 28% found the information in an employee handbook, 18% discovered it on their company’s intranet and 12% received a newsletter detailing the help that was available.

What Needs To Be Done?

Just under three quarters – 72% – of the women who responded to Forth’s survey said that their workplace needed to improve the level of support that was available for individuals experiencing symptoms of the menopause.

Whether by taking a leaf out of the book of 10% of organisations who do offer help and advice, or by designing their own processes or policies, there is a great deal that employers can do to ensure that their workers are cared for and do not need to resort to sick days or – in the worst case scenario – a resignation, as a result of the issues they are experiencing.

If you would like any further information about Forth or the results of our survey, simply get in touch with us today via [email protected]. The team will be more than happy to offer you any help or advice you may require.

Our advanced female hormone blood test, MyFORM™,  measures all 4 key hormones – FSH, LH, oestrogen and progesterone – across an entire menstrual cycle. A combination of blood analysis, AI and clinical expertise enables us to provide you with our own, unique hormone curves for all 4 hormones. In addition, we are able to calculate a score for your ovarian responsiveness. As women get older and enter perimenopause their ovaries start to become less responsive to the two control hormones. This insight, coupled with symptoms, can help confirm perimenopause.